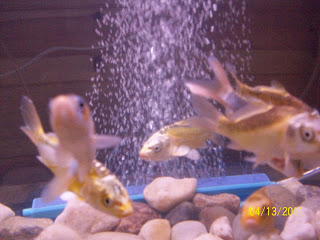 Figure Caption: The above figure shows the aggression of koi towards fancy goldfish. This data includes data from nine experiments The B stands for the biting behavior, S stands for the chasing behavior, and the C stands for the mock biting behavior. Looking at the figure above it can be seen that the most common aggressive behavior observed was chasing and the least common observed
Discussion:
After the results of the experiment had been analyzed it is clear that koi and fancy goldfish cannot coexistent together in a pond. The koi showed a high tendency to bite the fancy goldfish. This sometimes resulted in the fancy goldfish receiving tears in their fish which would make them more prone to getting diseases.  Another interesting observation that was seen while performing the experiment was that both the koi and fancy goldfish seemed agitated being placed together in one section of the tank, but when two koi were placed in one section of the tank they seemed to get along relatively well.  Other interesting side observations were made during the experiment when the koi and the fancy goldfish were placed into one section of the tank; the koi seemed to set up a territory in the section of the tank. When the fancy goldfish entered the territory of the koi, the koi would then act aggressively towards the fancy fish. When compared to the koi that were kept together in the holding tank, the koi all seemed to cluster together and no defined territory was set up by any one koi. The results of this experiment will help future and current pond owners better understand the temperament (aggressiveness) of the koi that they own. So that they can make better decisions as to what types of pond fish they can add to their pond that contains koi. Some aspects of this experiment could have been improved. The number of experiments that were preformed should be increased so that the data is accurate. The experiment should be conducted for longer periods of time, different times of the day, and with different environmental setting to ensure that the data is accurate. Another thing that could be done to help improve the results of the experiment is to set up three ponds with the same environmental conditions. In one pond put both koi and fancy goldfish into the pond. Then in the other two ponds place strictly fancy goldfish into the one pond and strictly koi into the other pond.  Then allow them to live in their respective ponds for an extended period of time (many years). Then as the fish in the ponds die record the number of fish that died in a day, the date when it died, and what pond it died in. Then after many years has passed look at the death rate for each pond.   Then compare the data that was obtained from that experiment and compare it to this experiment to see if there was a correlation. If there was that would strengthen the hypothesis: Koi will display aggressive behavior toward fancy goldfish.
Works Cited
KOI HISTORY. 24 Apr. 2011 <http://www.koiacres.com/koi-history.html>.
Raafat, Nadia and Margaret Pembridge. Fury after Freddie’s koi carp worth £1million die. 24 Apr. 2011                 <http://www.dailymail.co.uk/tvshowbiz/article-129259/Fu...>.
Posted by SHIPBIO at 5:33 PM